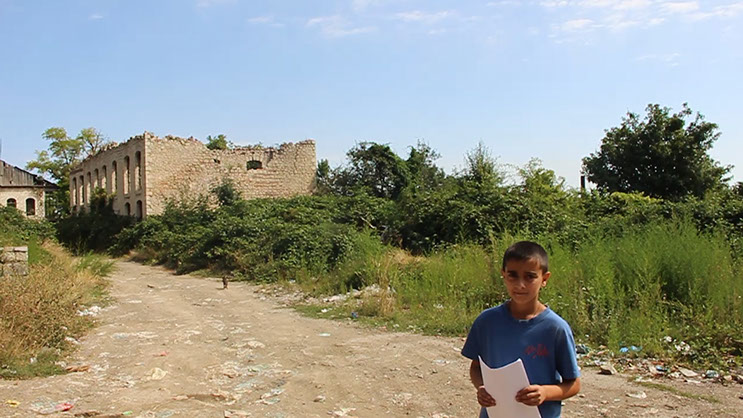 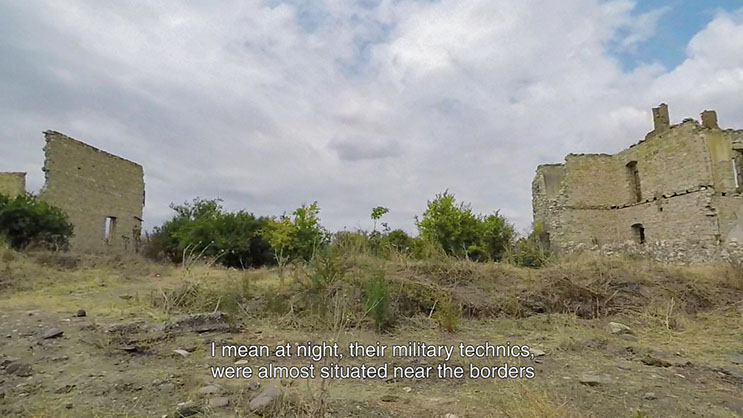 When it brackets a narrative, this kind of a framing device can be a clue for something. The frame can never be entirely disengaged from the story— however, it can throw the story off balance, like the boys that make an appearance in Agdam. Then the camera cuts, and the viewer is once again set in motion. The picture is restless: filmed out of the window of a moving vehicle, it shows a landscape devastated by lone ruins. The atmospheric, wavy sound—this time clear, without crackling—does not seem able to produce an air of tranquility. After almost half of the video’s duration, a telephone conversation is layered above the soundtrack. The woman on the other end of the line reports back in the style of a correspondent; however, from the perspective of a Karabakhian. There is talk of the military conflicts between Nagorno-Karabakh and Azerbaijan. The towns and villages in this frozen conflict zone are apparently stuck in an unstable post-war period. The narrator seems to encompass a longer time period than the recorded images, which are heavily rooted in the present. And yet, the woman’s report and the footage form a nearly synchronous common narrative. Always emphasizing the word we, she is confident that the Nagorno-Karabakh conflict—in which Russia, the US and Turkey also have an interest—can be resolved. But, she says, the various parties involved must look deeper into history and [the] historical roots [of the conflict] and take into consideration the historical and judicial truth.   [J.F.]